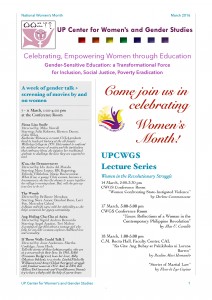 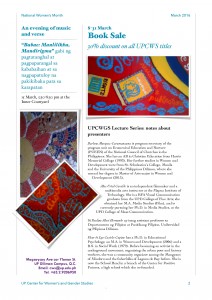 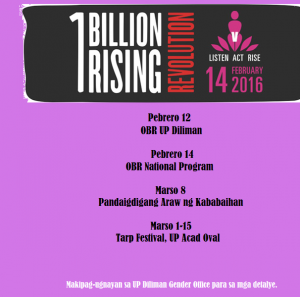 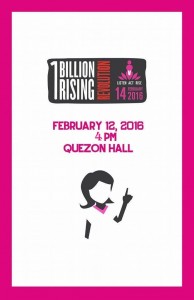 The University Center for Women’s and Gender Studies (UCWGS) led the three-day System-Wide Mini Conference on Gender and the GE Program in UP and Assessment of the State of Gender-Mainstreaming in the Curriculum held last January 11-13 at UP Visayas, Miag-ao Campus, Iloilo.
The mini conference gathered gender coordinators and other faculty members from various constituent units (CUs) to deliberate about the resolution calling for the inclusion of a specific course on gender relations in the new GE framework of the University of the Philippines and to survey the state of gender mainstreaming in the current curriculum.
The said paper was approved as a draft resolution in an inter-center coordinating committee meeting last June 23, 2015. This meeting was attended by the coordinators of the gender centers/committees/programs from different CUs. The resolution recognized the significance of mainstreaming gender concerns in the curriculum to ensure that UP students will be critical and compassionate thinkers who are committed to the promotion of equality, equity and social justice.
During the mini conference, the resolution, with additional provisions, was approved by the group. The group submitted recommendations, like, to add the word gender-sensitivity in the objectives and to include the CU’s gender center coordinator in the committee that review the GE curriculum.
UPV Chancellor Rommel A. Espinosa opened the said activity. Main speaker was Prof. Severa Katalbas, member of UPV GE Steering Committee and Associate Dean of the College of Arts and Sciences. She presented the Revised UP GE Framework paper. Faculty members from the CUs shared the syllabi of the gender courses they facilitate. For UP Diliman, Prof. Ma. Theresa Payongayong presented the Social Science III syllabus and Prof. Rommel Rodriguez the Panitikang Pilipino 19. Prof. Doris Wilson, Narcisa Canilao and Erlinda Palaganas of UP Baguio explained about the Social Science 13 syllabus. Other presenters were UP Manila’s Prof. Reynaldo Imperial for History 4, UPV Tacloban’s Prof. Anida Bernadette Batan-Lorenzo for Social Science 5, UP Los Baños’ Prof. Amelia Bello for Ecology 10 and UP Open University’s Prof. Rameses de Jesus for Social Science 13. Also, workshops were conducted to identify potential GE gender course methods of inquiry and competencies.
Participants of the mini conference hoped that a specific gender course on gender relations be included in the new GE framework. At the time of this writing, the University Council of UP Diliman has decided to convene a committee to study the current hybrid GE.

The UP Center for Women’s and Gender Studies held Seminar-Workshop on Gender-Sensitive Research and Networking Activity with the Women’s Studies Association of the Philippines in Balay Kalinaw, UP Diliman last October 27-29, 2015.
Dr. Odine Maria de Guzman, UPCWGS Director, opened the activity by discussing its objectives. The two-day seminar-workshop invited distinguished scholars from the university as resource speakers. Resource speakers were Dr. Raymund R. Pavo of College of Humanities and Social Sciences, UP Mindanao; Dr. Nathalie Africa-Verceles of Dept. of Women and Development Studies, UP Diliman; Dr. Jean S. Encinas-Franco, Dept. of Political Science, UP Diliman; Dr. Maria Dulce F. Natividad, Asian Center, UP Diliman; Prof. Aileen Paguntalan-Mijares, Dept. of Social Sciences, College of Arts and Sciences, UP Los BAnos and Dr. Ma. Theresa Payongayong, Dept. of Philosophy, UP Diliman; and Dr. Gonzalo Campoamor II, Director, Research Dissemination and Utilization Office, OVRCD, UP Diliman.
After the seminar proper, participants drafted research plans and presented them to the group. Dr. Carolyn I. Sobritchea gave helpful feedbacks and inspired the participants to pursue their research plans.

University of the Philippines

Pride is a struggle. The Stonewall Riots in 1969 was a protest against systemic violence against the LGBT people and other minorities in the US. It served as a precursor for the movement for LGBT liberation, a movement that was cognizant of the fact that it is not enough to ask to be included in a system that excludes. Meanwhile, in the Philippines, the first Pride March in 1994 was a protest against the government’s enforcement of the Value-Added Tax and State violence against LGBT people.

On the occasion of the success of the 21st celebration of the Pride movement in the Philippines, I wish to congratulate and express my solidarity with the Filipino LGBT people. I am one with you in fighting for the transformation of the society into becoming kinder and more caring of LGBT people.

The Metro Manila Pride March that was held last Saturday, June 21, made history when workers of Tanduay linked their arms and marched with LGBT people as an act of solidarity. Among the workers of Tanduay is Claire, a transwoman and a unionist actively fighting for the regularization of the contractual workers of Lucio Tan. The workers of Tanduay marched with Kapederasyon, an LGBT organization working for an end to discrimination of LGBT persons and justice for all working class people. Together, they called for justice for LGBTs and workers, with the recognition that these two struggles—the struggles of the working class and of the LGBTs have a common vision: a society where injustice, oppression and exploitation are non-existent.

We have victories to celebrate. In the spirit of international solidarity, we celebrate with LGBT people all over the world who have won their struggle for marriage equality, more recently in the United States. We celebrate with transgender people in some parts of the world for successfully struggling for the state to recognize their gender identities and right to self-determination. We celebrate with Filipino LGBTs in Quezon City, Angeles City, Davao City, Cebu City and other cities who succeeded in pushing for ordinances that protect them from discrimination.

But we still have a lot of struggles to win. In the US, LGBTIQ illegal immigrants continue to subjected to structural violence and remain vulnerable to sexual violence in prisons. In the Philippines, LGBTs living in areas affected by the VFA are forced into perilous jobs, putting them at the risk of being the next Jenifer Laude. Homophobic and transphobic structures allow for Filipino LGBTs to be harassed, bullied, beat up and killed with impunity.

Women, too, struggle for liberation from class and gender oppression. Women understand what it is like to be doubly enchained. Our bodies are policed, we are seen as sexual objects, and we are vulnerable to many forms of violence. Women also know from history that gender discrimination is the fruit of a system that puts profit above people, and commodities above dignity.

None of us are free until everyone is free. We struggle with you, but we also celebrate with you. Bringing together LGBT people and the Tanduay workers in the 21st Metro Manila Pride March adds to vibrancy and diversity of the event. But that is only the beginning: women, workers and LGBT people will continue to build on, and strengthen, our solidarity. The spring of the LGBT struggle is coming and that spring cannot be separated from the spring of the struggle of working women and men of our country. 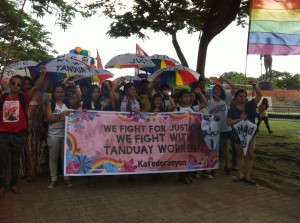 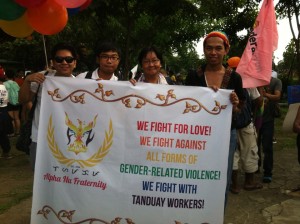 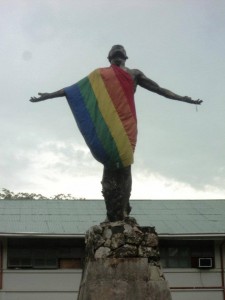 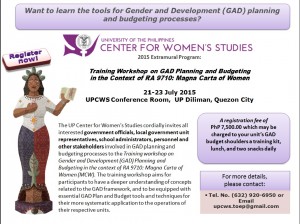 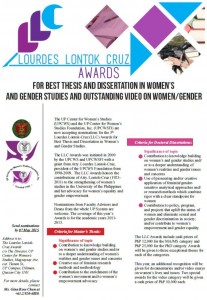 The LLC Awards was initiated in 2000 by the UPCWS and UPCWSFI with a grant from Atty. Lourdes Lontok-Cruz, president of the UPCWS Foundation from 1998-2009. The LLC Awards honors the contributions of Atty. Lontok-Cruz (1923-2011) to the strengthening of women’s studies in the University of the Philippines and her advocacy for women’s equality and gender empowerment.

Nominations from Faculty Advisers and Deans from the whole UP System are welcome. The coverage of this year’s Awards is for the academic years 2011-2015. Please help circulate.

Last March 27, our dear UP CWS launched these four new publications- Review of Women’s Studies Volume 22 (Special Issue on Tandang Sora @ 200 National Conference: Reconstructing Her-story), Gender Fair Language: A Primer (Revised Edition), and UP CWS Monograph Numbers 1 & 2. Prof. Judy Taguiwalo and the staff extend their gratitude to the guests who made the event most meaningful.